Table of content
1 Discover Phuket’s rich culture at Wat Chalong
1.1 The many attractions to see at Wat Chalong
1.2 Learn the way of the Buddha in the Grand Pagoda
1.3 Phuket – a place of wonders and adventures
1.4 Contact Us 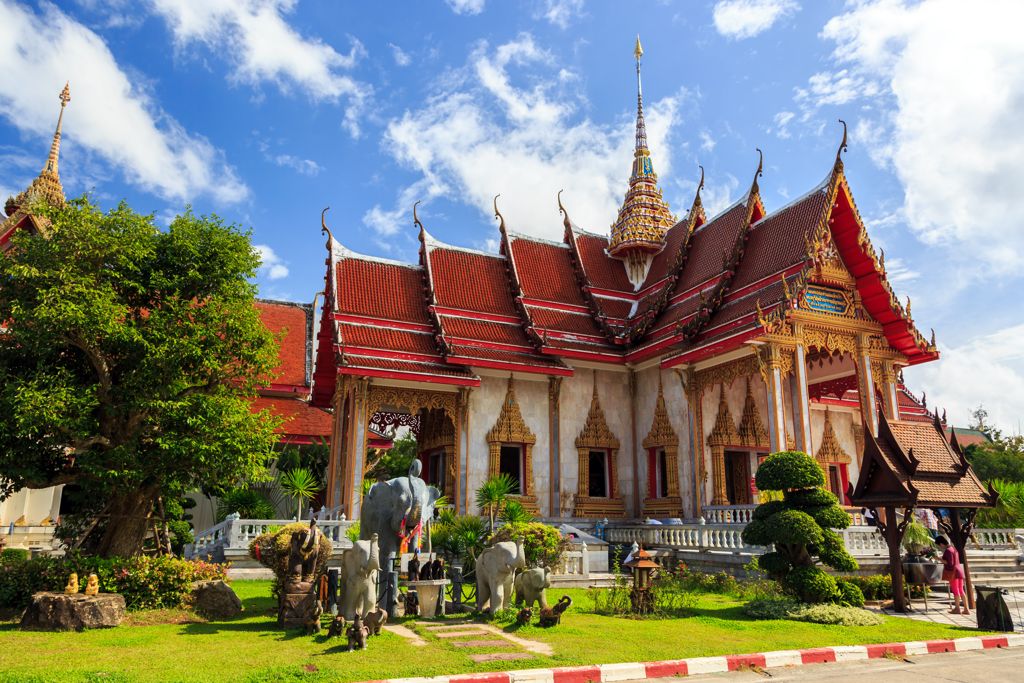 Thailand is a country big and rich in culture.
There are 29 Buddhist temples spread around in Phuket alone; all of them with their own history – and truly a sight to behold. One of the more famous and popular temples to mention is the Wat Chalong; mainly due to their warm and welcoming feeling towards visitors – a tradition going on for more than a century.

Locals come here to pray and tourists flock here to get more in-depth knowledge about Buddhism and Phuket’s culture.

A visit here truly is a spiritual experience. Wouldn’t you want to try?

Come join us as we elaborate this beautiful landmark of Phuket to you.

The many attractions to see at Wat Chalong

The temple contains several statues reminiscent of famous people in the history of Wat Chalong.

Poh Than Jao Wat is one of the more important statues in the Wat Chalong. Located in the westerly old hall of the temple, 2 statues praise the ground. One of an elderly man called Ta Khee-Lek, meaning ‘grandpa Khee-Lek’, famous for winning many lotteries after praying at the Poh Than Jao Wat statue – and the Nonsi statue.

Learn the way of the Buddha in the Grand Pagoda

The Grand Pagoda is the temples main hall. It even contains a splinter of Buddha’s bone and is officially named Phramahathatchedi-Jomthaibarameepragat. Decorated with wall paintings depicting Buddha’s life story and various Buddha images, this sight gives a very spiritual feeling. Furthermore, it is very cool and breezy at the temple, which can be a nice change to Phuket’s normally warm and humid climate.

Luang Poh Gleum and Luang Poh Thuad along with ancient Thai furniture, Benjarong, which is Thai porcelain designed in five colors – and – not to forget – also the famous walking-stick of Luang Poh Cham is kept in the current Abbot’s dwelling.

A truly remarkable sight for tourist
Of course, Wats are sacred places for the locals, so one should be aware of how to behave there. There are some rules one have to consider when visiting one of these temples. You will for example notice how people are very careful as to not place themselves, or stand over an image of Buddha, except when pasting gold leafs to them, which doesn’t happen in all Wats. It is also considered inappropriate wearing clothes that reveal one’s shoulders, chest, belly or legs – which you should also respect before heading to Wat Chalong.

Phuket – a place of wonders and adventures

This is merely one of Phuket’s many and exciting attractions and sights to behold. There is much more to offer and much more to discover while here.

If you would like to know more about Phuket, or how to relocate there, you can visit our website at www.phsproperty.com for more information.

Should you have more questions related to your visit to Phuket, an investment in one of the islands properties, or anything else that you think we can help you with – please feel free to send us an Email to: info@phsproperty.com.

See all our Projects